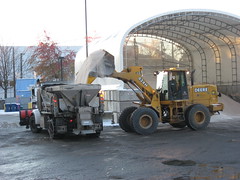 Given the amount of snow that has happened (both here in the UK and in the US) I’ve been thinking….why not put sea water on the roads to deice them?  I mean, we put salt on the roads to melt snow/ice.  Some places also “pre wet” the salt and make a brine.  Isn’t that what seawater is?

Now, granted, this wouldn’t work if you had to truck it great distances…but for a city on the coast, I imagine it would cost virtually nothing to pump a tanker fill of seawater and spray it on the roads.

I don’t think anyone does it do there must be a reason…..